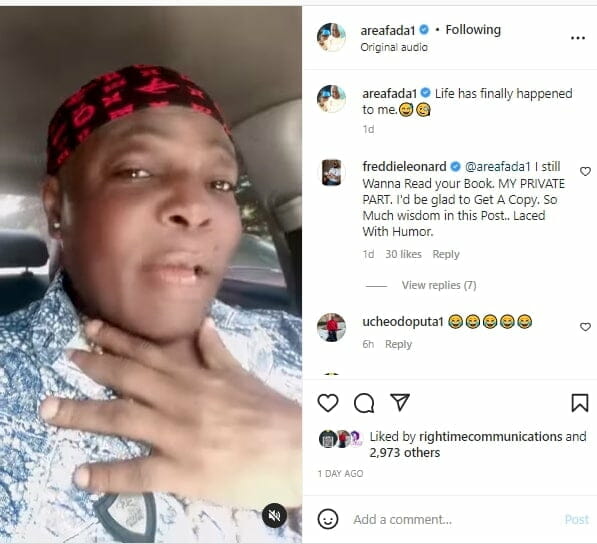 Controversial media personality, Charlyboy has reflected on his reality as he makes surprising revelations about his life.

Reflecting on his life, Charlyboy revealed how he used to sleep with different women who ended up giving him 10 children and 16 grandchildren.

He also disclosed how he married and divorced several ladies before settling down with his current wife whom he has been married for 45 years.

Speaking further, the singer said in the past, his manhood usually stand erect and ready for intercourse, whenever he sees a woman’s backside but now it is no longer the same.

KFN recalls that Charlyboy took a jab at Nigerian prophets by releasing his list of 2018 prophecies.

This is coming at a time popular pastors in the country are also revealing their prophecies for the year, 2018.

The OurMumuDonDo convener in a video shared on his Instagram page said Boko Haram will surrender in 2018.

Charlyboy said “My people 2018 don land. I would be a hypocrite to wish you all a happy new year but let me wish you less suffering, less stress, and less frustration. What does 2018 hold for us let me consult my crystal ball ‘Intelligible noises?

“The suffering shall increase if we allow them to keep pushing our mumu button this year, APC, PDP, all shall be rejected by Nigerians wey sabi hallelujah.

“I see Boko Haram laying down their arms and organising a peace concert.

“I see Nigerian police stop collecting bribes and brutalising the poor, hooray to them.

” Dead people will remain in the land of the dead they will no longer be made ministers.

“Old people shall pass away for the young to grow.

“This 2018 will be what we make of it if we swim or sink no messiah is coming to rescue us, make we all agree say our mumu don reach the final bus stop.”